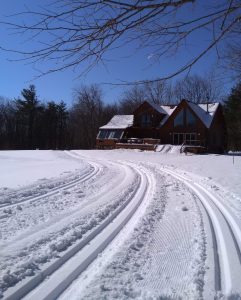 {the start line at the Glenvile Hills Classic on Friday before the race, we had so much fun on race day, no one bothered to take out their phones to snap a picture- you really had to be there}

After a windy friday in the teens, some skiers were apprehensive to hit the trail Saturday morning as the mercury fell below the 0’F mark. Luckily the sun shone, the wind subsided, and skiers were greeted with firm fast trail and comfortable racing temps (rising to the 20s). Die hard racers came from around the state. Races were held simultaneously at garnet Hill: Nino Manzella Hurtathon & Glenville Hills Classic.

At the Hurtathon- Chris Rose won for men, and is sitting in third overall for the season points With GHN-ADK Vauhti’s Jerry Truppelli right on his heals. Maddie Ralyea took another win, and her team mate (and last years Wilkinson champ Fianna Halloran secured the overall season points leader position.

With so many stats to rattle off, a table will help summarize:

Champs can be the icing on the cake for Rose and Halloran if there can continue their dominance on Feb 22nd.

Find 2 friends to ski with sunday, the team championships is fast, fun, and critical for the Club champions series.